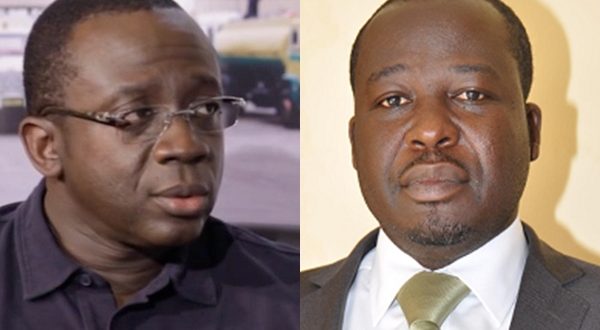 The former (L) and current (R) Managing Directors of BOST

The Bulk Oil Storage and Transportation (BOST) says the controversy over the sale of contaminated fuel is serving no purpose other than to distract from the financial rot overseen by the immediate past BOST Managing Director, Kingsley Kwame Awuah-Darko.

The rot under Kwame Awuah-Darko left a close-to-$300 million debt, according to BOST.

Following Citi News making known claims to the effect that, Ghana lost about GHc 7 million in revenue following attempts by the BOST to sell contaminated fuel to some oil marketing companies, there have been calls for the current BOST Managing Director, Alfred Obeng Boateng to be interdicted over the whole controversy.The Minority in Parliament, who are leading the charge went further to say the circumstances under which 5 million litres of contaminated fuel was dubiously sold has led to a 14.25 million cedis financial loss to the state.

But in a statement, BOST insisted these issues were coming to light to frustrate the attempts by the current BOST Managing Director to address the financial rot at the company.

“The Minority’s assertion that the MD of BOST should be interdicted is baseless and unfounded. It is a political plan to divert the new MD’s attention from dealing with the rot of his predecessor, Mr. Kingsley Kwame Awuah-Darko, which has left BOST with a debt close to $300,000,000.”

This rot, according to BOST, includes the diversion of GHc 40.5 million of company funds to a fictitious account currently under investigation.

Following this, the National Petroleum Authority, (NPA), confirmed that the two companies alleged to have purchased the over 5 million litres of contaminated fuel from BOST, Zup Oil and Movenpinaa Energy, were not licensed to engage in that transaction.

Find below the full BOST statement